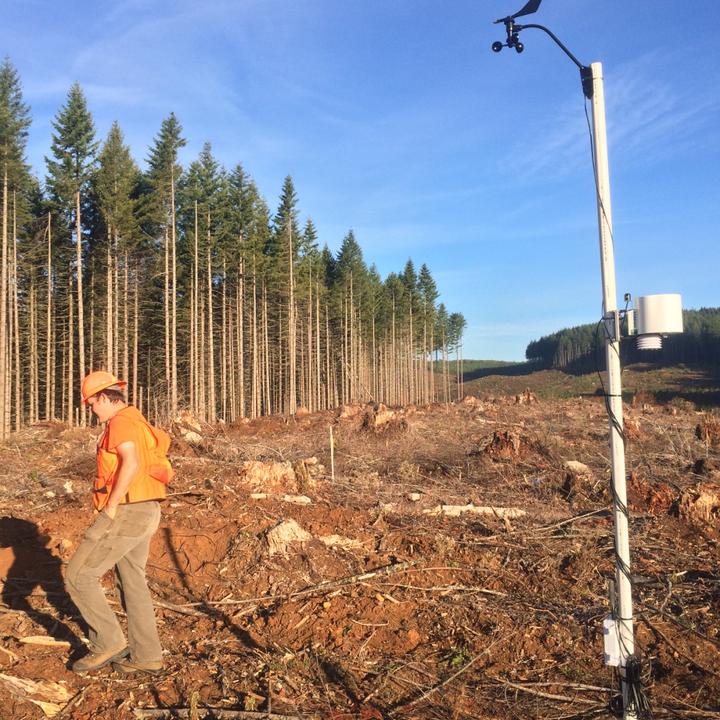 Jeff Hatten walking along the boarder of the treated area, weather station in the foreground

This will be one of a multi-part series on this topic. Read more below:

Long-term is in the eye of the beholder. Long-term forestry research means using tree-life-cycles as the yardstick. The Long-term Soil Productivity Program started in the 1990’s through the USDA Forest Service recognizing the need to try and predict what will happen to our forests upon the 3rd, 4th, and 5th harvest rotations. It has since become an international network of sites with the oldest sites surpassing 30 years of repeated observation. A colleague (Stephanie Winters) in my lab is beginning the re-analysis of the oldest LTSP sites now.

Using biofuels as a a way to limit our reliance on oil is not a new idea. But instead of using agricultural land to grow soybeans for ethanol conversion (my goodness, I’m befuddled we’re still doing that), how about using materials that would otherwise be wasted and convert that to biofuels? Following a forest harvest, the residual biomass (tops of trees, branches, and broken stems, legacy wood, etc..) would be piled on the hillside and burned. They burn it for two reasons: (1) it’s a fire hazard to have all this fuel on the ground, and (2) it makes re-planting the hillside much easier. If you’ve ever walked around a harvest site where they didn’t pile up the residual biomass you’d know what I mean. Instead of burning the biomass on site, what about transporting all those wood products to a biofuel conversion plant? It’s using the waste product of one industry, as the feedstock for another industry.

Whether or not you believe me, this makes economic and ecologic sense! However, it only makes sense for a rather specific set of circumstances; high fuel prices, high availability of forest biofuels, short transport routes, and the conversion to jet fuel. it just so happens, a few spots in the Pacific Northwest have those qualities (it’s likely a few areas in California have similar qualities but it was not studied); lots of harvesting, lots of forest residuals, a (wild)fire issue, and Alaska Airlines had their central hub in Seattle (Alaska Airlines later became a funder of the project). There was a lot of promise, because you could create an economic incentive for thinning which also reduces the probability of high intensity wildfires, for the added benefit of offsetting some of our carbon footprint when flying. While the proof of concept was promising, along with all the Life Cycle Analysis' that were generated from the project, eventually gas prices dropped which made the economics drivers fall apart. It’s still on the shelf, but no longer being actively pursued. I should also mention that the NARA project is how my Masters at Oregon State University was funded.

Case-Study in the Oregon Cascades