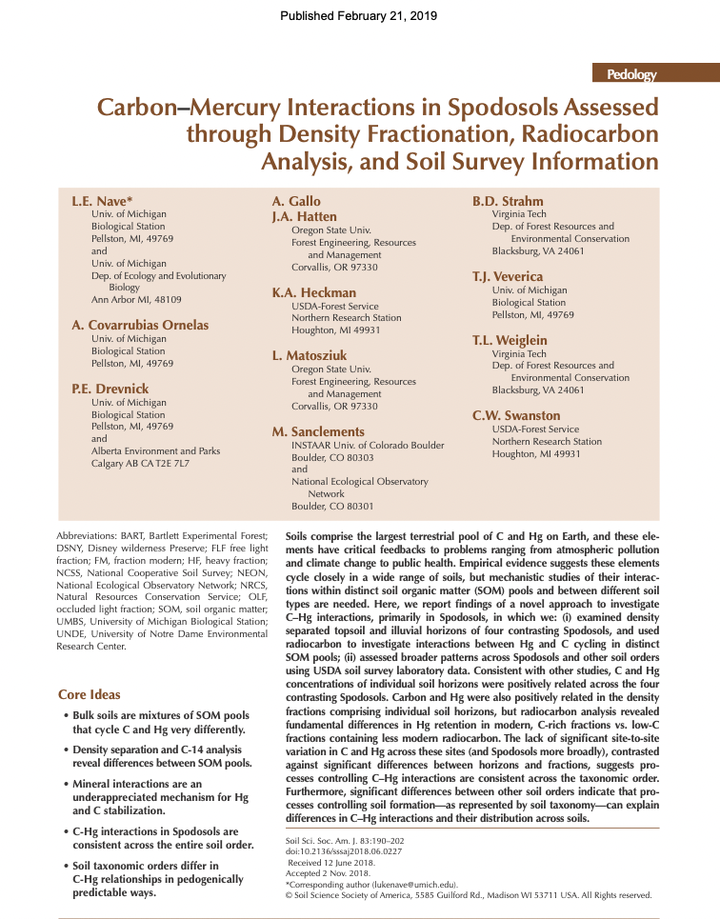 Soils comprise the largest terrestrial pool of C and Hg on Earth, and these elements have critical feedbacks to problems ranging from atmospheric pollution and climate change to public health. Empirical evidence suggests these elements cycle closely in a wide range of soils, but mechanistic studies of their interactions within distinct soil organic matter (SOM) pools and between different soil types are needed. Here, we report findings of a novel approach to investigate C–Hg interactions, primarily in Spodosols, in which we: (i) examined density separated topsoil and illuvial horizons of four contrasting Spodosols, and used radiocarbon to investigate interactions between Hg and C cycling in distinct SOM pools; (ii) assessed broader patterns across Spodosols and other soil orders using USDA soil survey laboratory data. Consistent with other studies, C and Hg concentrations of individual soil horizons were positively related across the four contrasting Spodosols. Carbon and Hg were also positively related in the density fractions comprising individual soil horizons, but radiocarbon analysis revealed fundamental differences in Hg retention in modern, C-rich fractions vs. low-C fractions containing less modern radiocarbon. The lack of significant site-to-site variation in C and Hg across these sites (and Spodosols more broadly), contrasted against significant differences between horizons and fractions, suggests processes controlling C–Hg interactions are consistent across the taxonomic order. Furthermore, significant differences between other soil orders indicate that processes controlling soil formation — as represented by soil taxonomy — can explain differences in C–Hg interactions and their distribution across soils.

Spodosols are the most photogenic soils (personal opinion). Their dark organic surface horizons, followed by a light colored mineral horizon, then bookend-ed with another very dark - often red - mineral horizon makes these tri-colored soils magnificent to stare at. These Spodosols are relatively rare, but concentrated in a few places in the US where historical anthropogenic emissions are the most likely sources of Mercury. In this paper we focus on different Spodosols around the US, combining pedologic and geochemical analysis to identify how carbon and mercury interact down the soil profile. Download the PDF.