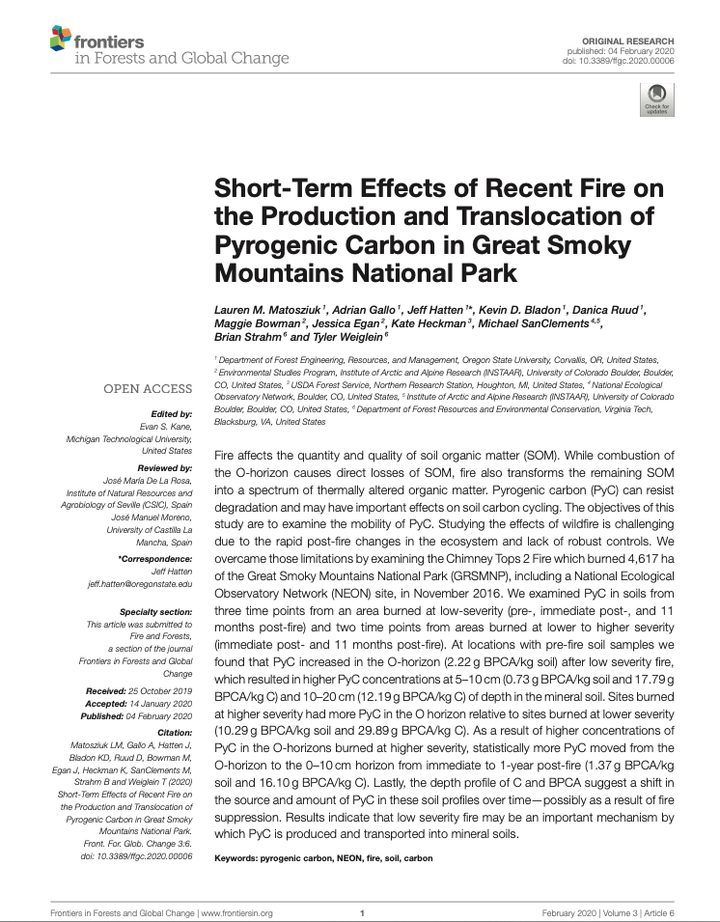 Fire affects the quantity and quality of soil organic matter (SOM). While combustion of the O-horizon causes direct losses of SOM, fire also transforms the remaining SOM into a spectrum of thermally altered organic matter. Pyrogenic carbon (PyC) can resist degradation and may have important effects on soil carbon cycling. The objectives of this study are to examine the mobility of PyC. Studying the effects of wildfire is challenging due to the rapid post-fire changes in the ecosystem and lack of robust controls. We overcame those limitations by examining the Chimney Tops 2 Fire which burned 4,617 ha of the Great Smoky Mountains National Park (GRSMNP), including a National Ecological Observatory Network (NEON) site, in November 2016. We examined PyC in soils from three time points from an area burned at low-severity (pre-, immediate post-, and 11 months post-fire) and two time points from areas burned at lower to higher severity (immediate post- and 11 months post-fire). At locations with pre-fire soil samples we found that PyC increased in the O-horizon (2.22 g BPCA/kg soil) after low severity fire, which resulted in higher PyC concentrations at 5–10 cm (0.73 g BPCA/kg soil and 17.79 g BPCA/kg C) and 10–20 cm (12.19 g BPCA/kg C) of depth in the mineral soil. Sites burned at higher severity had more PyC in the O horizon relative to sites burned at lower severity (10.29 g BPCA/kg soil and 29.89 g BPCA/kg C). As a result of higher concentrations of PyC in the O-horizons burned at higher severity, statistically more PyC moved from the O-horizon to the 0–10 cm horizon from immediate to 1-year post-fire (1.37 g BPCA/kg soil and 16.10 g BPCA/kg C). Lastly, the depth profile of C and BPCA suggest a shift in the source and amount of PyC in these soil profiles over time—possibly as a result of fire suppression. Results indicate that low severity fire may be an important mechanism by which PyC is produced and transported into mineral soils.

This paper was built on a new method that was developed by Dr. Matosziuk. The Benzene Polycarboxylic Acid (BPCA) method allows us to determine the quantity and quality of pyrogenic carbon. This method was later expanded to include NEON sites, you can see a conference poster summarizing the work, or you can download the PDF.