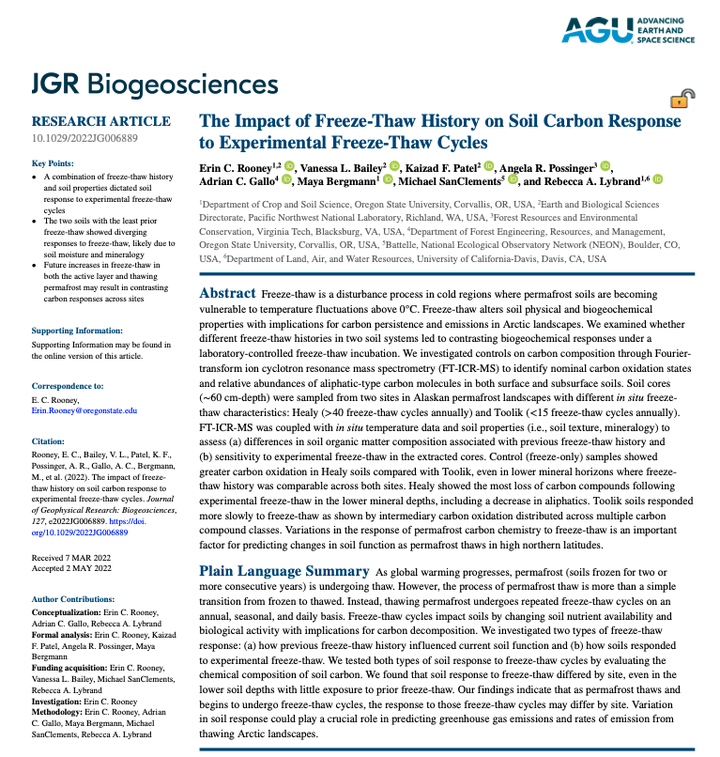 Freeze-thaw is a disturbance process in cold regions where permafrost soils are becoming vulnerable to temperature fluctuations above 0°C. Freeze-thaw alters soil physical and biogeochemical properties with implications for carbon persistence and emissions in Arctic landscapes. We examined whether different freeze-thaw histories in two soil systems led to contrasting biogeochemical responses under a laboratory-controlled freeze-thaw incubation. We investigated controls on carbon composition through Fourier- transform ion cyclotron resonance mass spectrometry (FT-ICR-MS) to identify nominal carbon oxidation states and relative abundances of aliphatic-type carbon molecules in both surface and subsurface soils. Soil cores (∼60 cm-depth) were sampled from two sites in Alaskan permafrost landscapes with different in situ freeze-thaw characteristics: Healy (>40 freeze-thaw cycles annually) and Toolik (<15 freeze-thaw cycles annually). FT-ICR-MS was coupled with in situ temperature data and soil properties (i.e., soil texture, mineralogy) to assess (a) differences in soil organic matter composition associated with previous freeze-thaw history and (b) sensitivity to experimental freeze-thaw in the extracted cores. Control (freeze-only) samples showed greater carbon oxidation in Healy soils compared with Toolik, even in lower mineral horizons where freeze- thaw history was comparable across both sites. Healy showed the most loss of carbon compounds following experimental freeze-thaw in the lower mineral depths, including a decrease in aliphatics. Toolik soils responded more slowly to freeze-thaw as shown by intermediary carbon oxidation distributed across multiple carbon compound classes. Variations in the response of permafrost carbon chemistry to freeze-thaw is an important factor for predicting changes in soil function as permafrost thaws in high northern latitudes..

This paper comes from permafrost (permanently frozen) soil cores out of the (NEON project) and is Dr. Erin Rooney’s second chapter of her dissertation (See her first chapter).

We spent many many hours in the freezer together because these soils needed to be described while still frozen. A hammer and chisel were our best friends to create soil hockey pucks allowing us to see how soil changed in the cores. Erin is particularly interested in the active zone of permafrost, where it’s beginning to thaw due to … drumroll please… climate change! The amount of water and oxygen that can diffuse though soil has a direct impact on how fast, or slow, microbes can chew threw all that locked up carbon. In Dr. Rooney’s first paper she looked at the physical changes to the permafrost, but in this paper we looked at the changes in soil organic matter after freeze thaw cycles.